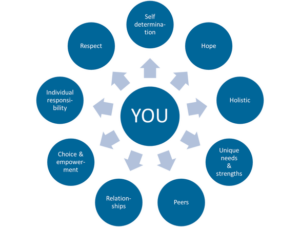 PACT (Program of Assertive Community Treatment) is a system that serves people with major mental illness, including schizophrenia and bipolar disorder, and is designed to support those at risk for repeated hospitalizations or who have had recent homelessness.

The hallmark of a PACT program is a multi-disciplinary team, available 24x7x365 to meet the needs of clients WHERE THEY ARE. If that means accompanying them to their driver’s license test or to court, the PACT team will do that.

The Pact program at McLean Hospital continues to thrive. The leadership team has been actively engaged in outreach and expanding into marginalized communities through partnerships in communities like Chelsea, MA.

The team is on the leading edge of incorporating diversity of the team and among the clients. Philanthropy continues to support the program by making in possible to offer scholarships as needed (Aside re: about efforts to require full coverage, so scholarships will some day not be necessary).

In 2013, I established The Living Assistance Fund at McLean Hospital. What was meant to be fundraising to pay for care for those who couldn’t afford care, quickly became fundraising to support establishing a PACT program at the hospital.

In October 2017, PACT was launched at McLean Hospital. There was immediate demand for spots. The program will grow to 25 individuals by Oct 2018 and 60 the year after.

Within the first week, there were 5 people in the program. By January 2018, there were 15 with two “alums”.

A common goal for everyone is to avoid hospitalization – and the PACT team has been making a real difference. Most people have not been re-hospitalized and those who have needed that extra care have had shorter stays – partly because they can return to the supportive environment of PACT.

In addition to returning to work, school and volunteering, program participants are going bowling and playing laser tag. You might wonder why that’s important. When life has been disrupted by a psychotic episode, it can be hard to find new friends and things to talk about that are not related to psychosis. It’s so important to have friends and be able to hang out with people. Bowling, laser tag and other social events are all opportunities for just being you.

The PACT program “turned” one year old in October 2018. There are so many highlights from year one, but just to name a few